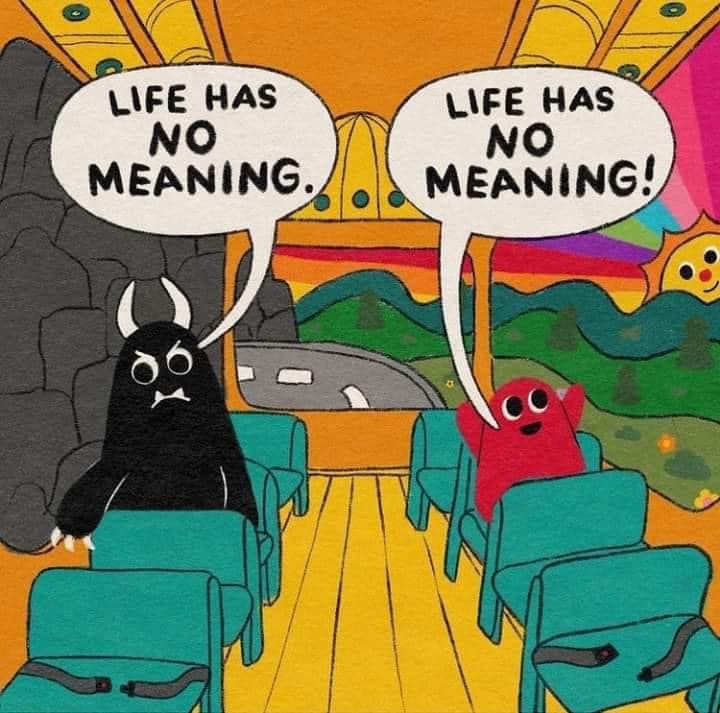 Life has no meaning the moment you lose the illusion of being eternal.

Dustin N Sweepin
Google: is truth constant?
It is constant. Which means if it isn’t constant, it isn’t true. Which means the entire universe, which is built on change, is in fact not true..
Only that which cannot change is true; aka eternity

Michael Affatato
But we are eternal.!.!. the funny thing is that people who think they know about science talk about science as facts but the upper echelon of the true science world has taught us we are in fact eternal

Marcus Tyrone
The meaning of life is….
The meaning you give it.
You're the artist it's the canvas.

Paul Brewer
There’s only one source of meaning: Shemp.
Meditate on Shemp and everything will be okay.

Brenda Lxve
Actually i think life is to love as much as love is to live , Asè🦋🙏🏻💫

Naomi Lu
But we ARE eternal.

Bob Billy IV
So glad they are both wrong!!!

Chace Sheldon
Illusions are real so, riddle me that

Marty Baldwin
“That movie didn’t mean anything because it eventually ended.”

Mike Massaro
Just goes to show you, we are going to suffer regardless, why not make the best of it

Krystan Crow Shoe
Life is full of the meaning we give it. Therefore, it has meaning 🙂

Danny Rowbotham
Reality is what you make it. And nothing more.

James Popela
But it definitely does have meaning.

Brian Bridwell
I oscillate between the two.