OFF THE WALL WE ARE ALL 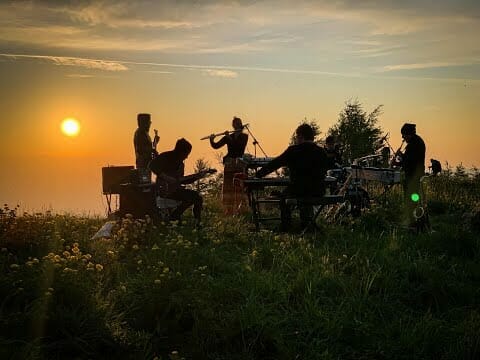 That night we took off into the hill of gardens called 'Pigl'. When everyone was sleeping.

With two burning torches in our ten pairs of hands, and one guitar, and a saxophone, we went up and climbed that hill across the other side of the not so ancient castle. Past all the local gardens, sleeping away in their serenity, we ascended to its uppermost and distant corners. 'Pigl' has always been our meeting point. At least one of them. One of the best ones. And its special strategic position, overlooking the town of Ravne has already been misused for ages. And that was way before we came to be. And it will stay that way, way past our times.
In that corner there and that night, we did set up a little bonfire, quite privately, without disturbance. just big enough for us to keep us warm and to lighten up. And we sat around it.

Then we stuck the two burning torches on both sides of the firepit and sat down next to it. And in that moment we were ready. It wasn't too cold. Not warm. Not at all. We had dark hardwood sticks that we picked up from the forests beyond.

There as well, on the 'Pigl' hill, were the towns municipality water filtering pipes sticking out from the ground. And they're still there, sticking out today. They remind me of the Treasure island. And that night the moon above was shining in its fullness. I still clearly remember it. And all those sheep kind little silver edged clouds covering the ornamental veils across the skies. As it was magic. It was perfect! And inside that magic night, the music opened.

The guitar and the saxophone opened up first. It was a gentle intermezzo. The guitar player shy as Libra, bringing in the tune, and the sax maestro getting ready, tuning in, on his. More than magic is the music. At least that night it was. The music turning up the rituals of time to stop and change the clocks.
And the other six pairs of hands slowly started drumming with hard sticks on the tops of the deep green steel covered water filtering pipes, with penetrating sounds, echoing deep into the night. The sax player was shy, and firstly didn't want to do it as he thought we will wake up whole town. But we all said yes. And we did it. And the sax just marvelled.

And maestro on the sax tuned up in moving all the air that night. It was a symphony. The symphony of humming of the wretched souls. Fragile as we are. And music. Music is magic.

And the music went on. And the music just couldn't stop. And in that very moment we weren't stoppable anymore. We were there. In the moment. Where the music is. And the sounds were very much alive.
The sounds of songs were penetrating the silence of far dreams. And there was no singing. The sounds in songs. in dreams of all wide world sleepers. And they were alive. They got alive. Their souls. And they didn't know it!
In those very moments the dreams went deaf and the silence was penetrating loud. And then we were living. Living in that night. Howling for forever.

And by today, and by every declaration of today, some of us are dead. At least two I know. And to a certain degree, technically, we are all dead anyway. But that music remains. That melody. And the moon that reflects the light. The wonderous dish that resonates the sound. That resonance remains, the light and illuminated night.
And that is the place of dedication. And no matter what, for these moments I will be always thankful for. And I am thankful for you. If you are. And if that would be only me. Off course. Thank you! You deserve it.